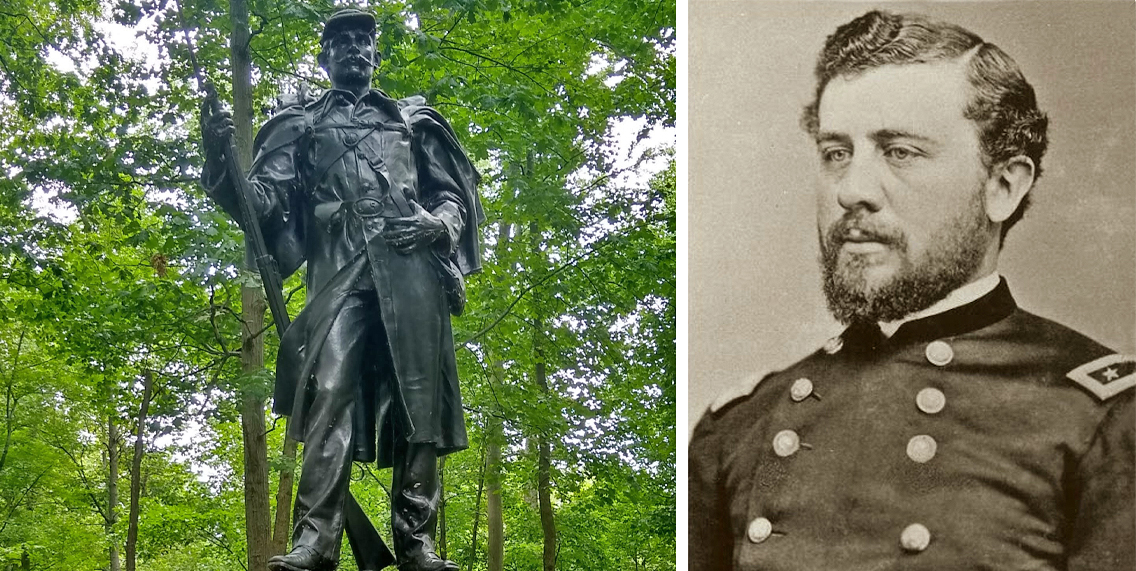 02 May The 53rd PA, Brooke’s Brigade, and the Wheatfield

“This was the hardest fight I was ever in”

The 124 men of the 53rd Pennsylvania Infantry, commanded by Lieutenant Colonel Richard McMichael, and the rest of Colonel John Brooke’s Brigade (2nd Division, 2nd Corps) stood in position along the southern edge of the Trostle Woods. To their left was the 64th New York and the 2nd Delaware. To their right, the 27th Connecticut and the 145th Pennsylvania. In front of them was that all too familiar fog of war floating above a field of winter wheat. Hidden amongst the smoke were three Federal Brigades (Zook, Kelly’s Irish and Cross) trying their hardest to hold back attacking troops from South Carolina (Kershaw’s Brigade) and Georgia (Anderson’s Brigade). At around 5pm Brookes ordered his men forward to relieve Cross’s men. They rushed forward into the wheat, their line spanning the entire width of the field. They were instantly met with enemy musketry from Anderson’s Georgians. Halfway across the wheat field, Brooke ordered his men to “Halt, fire at will.” For five minutes they poured lead into the Rebels at the southern edge of the field.

Then the order “fix bayonets” was given. Brookes stood in front of the lines, grabbed the flag of the 53rd and carried them forward. “At the word of command the men dashed forward and with loud shouts drove the enemy, scattering his ranks and gained the position”, this position being the wooded heights just beyond the field. They chased the fleeing Rebels through the wood but with difficulty and the rocky terrain of the woods disorganized Brookes’ men. This, added with the adrenaline and confusion of battle, brought forth a larger issue. Corporal Anthony Beaver of Company C wrote it best “we advanced too fast for our troops on the right of our Brigade, that give the Rebs a chance to flank us”. Beaver was right. In the smoke of battle, the brigade had pushed too far past Kelly’s men back to their right and the newly arrived Regulars back to their left. Brookes had to reposition his men into a “C” formation in an attempt hold back Confederates closing in on the western portion of the woods. The 53rd was first to face the attack by Semmes’ Brigade. The Rebs charged twice across a narrow meadow but were cut down by the fire. Many noted that “this was the hardest fight I was ever in”. They held their ground until their position became their enemy. A threat to the brigade’s left was looming, Anderson’s Georgians. They had reformed and now brought forth a line of men much longer than Brookes’.

Now the Confederate tide out flanked Brookes entirely. With the Rebels closing in, Brookes ordered a quick withdraw. Now 53rd and the rest of the brigade were the ones being chased back across the woods and across the bloodied wheat field. The Rebels rained hot lead into the backs of their retreating foes, inflicting heavy losses. Many men were shot from behind and fell face first into field, dead. One man, Sergeant Matthew Isett of the 53rd’s Company C, was wounded severely in the in leg. Corporal Beaver and another soldier tried carrying him from the field, but with the Rebs closing in, Isett had to be left behind. On July 4th, Beaver and three others returned to that field of death to find Isett. He was found dead like so many others that had suffered similar fates. They buried Sergeant Isett on Michael Fry’s farm.